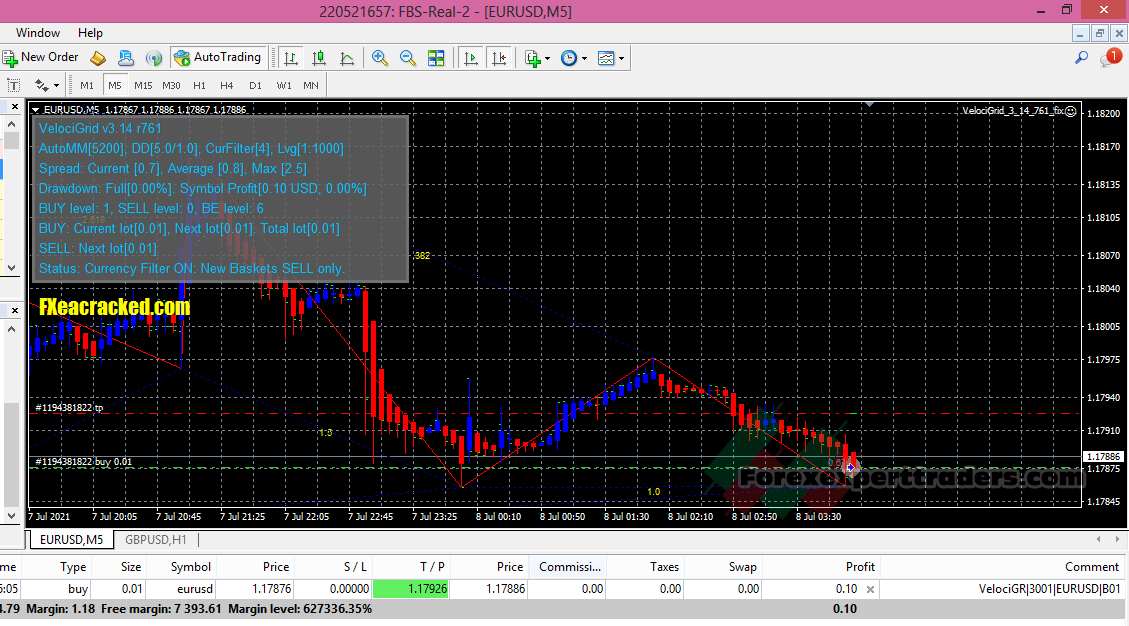 Multicurrency Grid Ea Expert Advisor based on a modified version of the Martingale systemwith an additional function of using averaging. The Expert Advisor builds a grid from a group of orders (opens a new position if a drawdown appears on the previous one) until all positions are closed at once in profit or breakeven. Stop Loss is not used in the system, so there can be no separate fixing of losses. A distinctive feature of VelociRaptor Grid is that it opens another new position not with a certain grid step, as is customary for most advisers, but at the opening of each new candle, if the distance to the previous order is not less than the one specified in the settings, thus each time a dynamic grid of orders.
Currency pairs : EURUSD, AUDUSD, NZDUSD, USDCAD, AUDJPY, EURJPY, EURGBP, AUDCAD, GBPCAD, NZDCAD. EURAUD, AUDNZD, EURCAD Timeframe : M15, H1 Trading time: Round the clock

SetName The name of the current set file.
====== SETUP_Expert | Expert Settings ====== Magic | Individual Magik number. It is necessary for the advisor to be able to distinguish its trade orders from thirdparty advisors or manual trading. TakeProfit | The value of taking profit (Take Profit).

Min Laverage | Leverage filter: new grid orders will not be opened if the leverage for the current symbol is less than the one specified in the settings.
Max Spread Setting the maximum allowable spread for opening the first grid order. When MaxSpread> 0, the filter is activated. If, upon receiving a signal, the current spread is greater than the MaxSpread value, then the entry is postponed and an attempt is made to enter at the next tick. If no entry has been made for the current candle, then entry at the next one is possible only if the signal is saved.
====== SETUP_Mmanagement Setting up MoneyManagement ====== Lot | The lot with which the first deal on the grid will be opened. If DepositAutoMM > 0, then the Lot value is not taken into account. DepositAutoMM Setting the value of the allocated deposit to 0.01 trading (minimum) lot. If set to O, the lot size is taken from the Lot variable. (Example: Balance is 10,000, DepositAutoMM = 2,000, then the initial lot with which the grid will be opened is 10,000 / 2,000 * 0.01 = 0.05)

MaxDD Stop Percent Maximum open drawdown (in%) at which it is allowed to open a new basket. MaxDD Release Percent | Drawdown, upon reaching which the block prohibiting trading is removed.
LocalDD Close Percent Compulsory closure of all orders when the specified drawdown percentage is reached. Currency Filter Suspension of opening transactions in a currency, if there are already transactions in this direction for it. Designed to signal the need to stop / restore trading in the direction of existing transactions in the currency when opening a new transaction. If CurrencyFilter> 0, an entry delay will be activated after a signal appears in seconds. If CurrencyFilter = 0, the filter does not work. For example, we opened on EURUSD on BUY, which means we freeze the opening of transactions on EUR for BUY, and for USD on SELL. That is, USDCAD will open on BUY, but GBPUSD will not open on BUY (only on SELL). But, on EURUSD, a new BUY deal will be opened to continue building the grid. SELL deals on this pair will also be allowed, as they have the opposite direction. ====== SETUP_MartinGrid Setting up Martingale mode ====== Multiplier | The value by which the lot of the current open grid order will be multiplied. It is needed to calculate the lot of the next knee. (Example: The lot of the current open position is 0.1, Multiplier = 1.6, then the next grid order will open with a lot of
0.16)
Distance The minimum distance from the current price to the nearest open grid order, in points, less than which the grid knee will not open on the next bar. BaseLotLevelCount Averaging parameter. It is equal to the number of knees that will open sequentially with the base lot.

====== SETUP_Strategy Strategy parameters ====== Strategy 15 strategies for entering the market with the first order based on RSI, WPR and candlestick analysis Reverse Signal Function that activates the grid against the indicator signal BothDirectionTrade | If true, the market is entered on each indicator signal. if there is already a Buy grid and a Sell signal appears, we open an additional grid.
====== SETUP_Indicator_RSIRSI indicator parameters ====== RSI_Period The number of chart candles from the current bar for calculating the RSI indicator value. RSI_MinMaxLevels Setting overbought / oversold levels of the RSI indicator.
====== SETUP_Design Design settings ====== LabelColor Info panel text color LabelFontSize PanelType Dashboard Text Size Three options for choosing the background color of the information panel PanelTransparency Setting the transparency value of the panel from 0 to 255.

How to set the risk you need: For example, you want to set the risk of 10% on the AUDJPY pair. Open the attached Excel spreadsheet. We put 10% in the X column, the balance for Auto_MM changes to 14,200. This means that to trade with a minimum lot of 0.01, you need 14,200 units. balance. If your balance is 50 000, the first order will be opened with a lot 0.03, as can be seen from column G Since the trade involves a large amount of steam is recommended for the manifestation of a significant drawdown, manually stop the trafficking of inactive pairs (parameter StopTradeAfter TP), in order to reduce its risks increase when important news is released, and also avoid correlation. 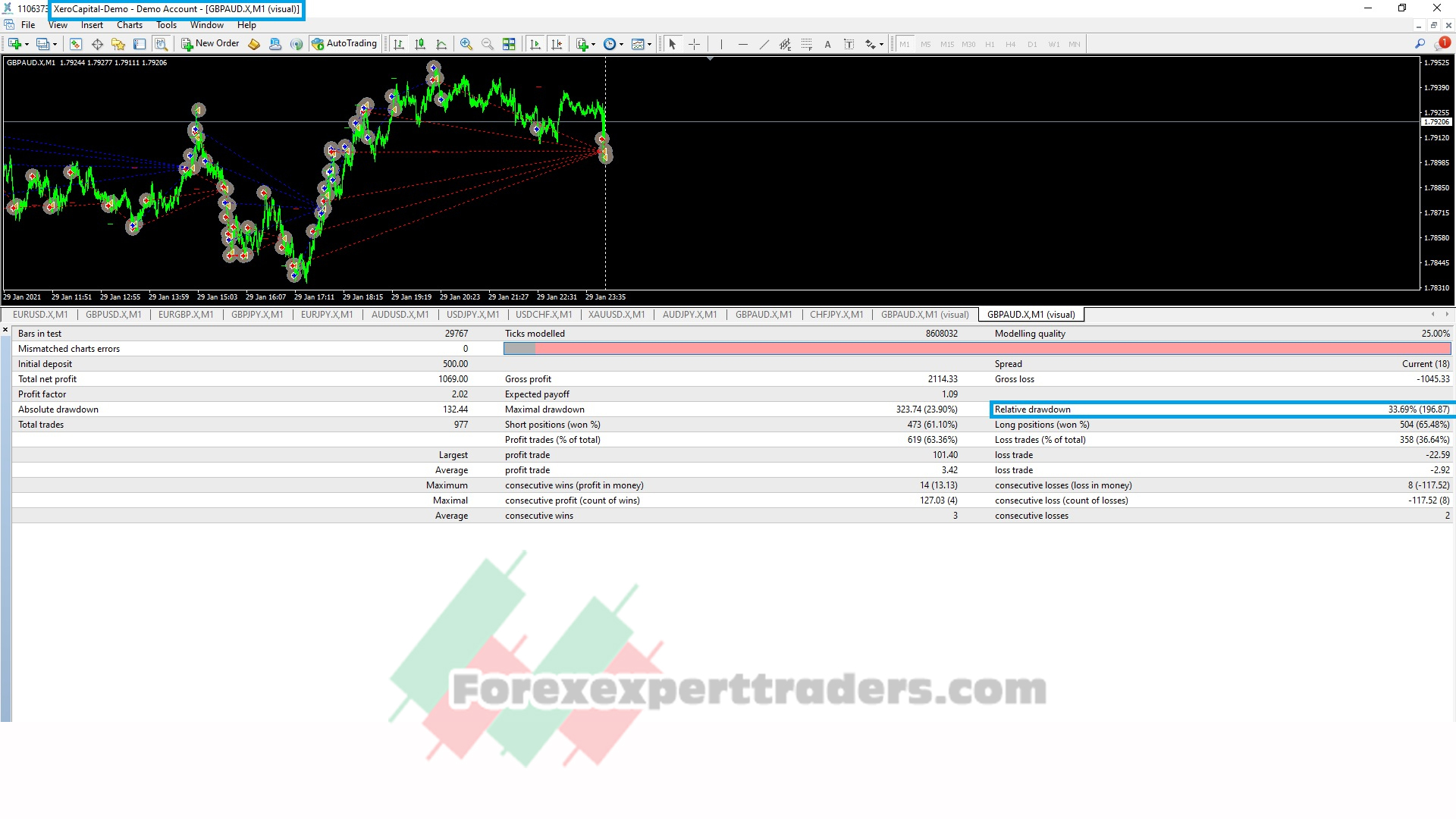